Out of 1 Ratings
Owner's of the Hitachi Camcorder DZBX35A gave it a score of 1.4 out of 5. Here's how the scores stacked up:

Reliability
1.0
Out of 1 Ratings

Owners of the Hitachi Camcorder DZBX35A have given it a Reliability score of 1.0 out of 5.

When it comes to products, Reliability rates high in importance. Your Camcorder’s ability to perform and maintain its functions during everyday use, as well as extreme use or under unexpected circumstances, is important when making purchase or repair decisions.

Durability
1.0
Out of 1 Ratings

Owners of the Hitachi Camcorder DZBX35A have given it a Durability score of 1.0 out of 5.

How will your Camcorder hold up over time and withstand the wear and tear of constant or long-term use? A product with strong Durability is a product that was made to last and provide a good ownership experience over it’s lifetime.

Maintenance 3.0
Out of 1 Ratings

Owners of the Hitachi Camcorder DZBX35A have given it a Maintenance score of 3.0 out of 5.

Most Camcorder owners intend to keep their Camcorder in good working condition. Knowing up front if the Maintenance or repair of a product is easy or difficult can have a profound impact on your decision to make a purchase.

Performance 1.0
Out of 1 Ratings

Owners of the Hitachi Camcorder DZBX35A have given it a Performance score of 1.0 out of 5.

Camcorder's that are purchased and meet or exceed expectations usually share the trait of good Performance. Feeling that a product was worth the purchase because it does everything you expected, and does it well, is a clear indicator of a product that truly performs.

Owners of the Hitachi Camcorder DZBX35A have given it a Ease of Use score of 1.0 out of 5.

How hard is this Camcorder to operate? If purchased, would tons of time be lost trying to figure out how it works? Simply put, Ease of Use is a measure of how easy a product is to use. Having this knowledge prior to purchase can help avoid buyer’s remorse. 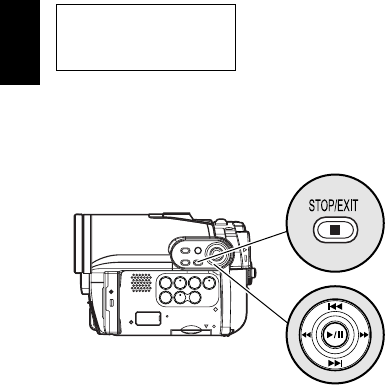 English
70
1<>2/3
PLAYING BACK LATEST RECORDED SCENE
Playing Back
1 Press the A button in the recording pause
status.
The DVD video camera/recorder will enter
the playback mode, and the scene you have
recorded last will be played back. (For
“scene”, see p. 67.)
When playback is finished, the DVD video
camera/recorder will enter the pause status
at the last image on disc.
If the playback pause status continues for as
long as 5 minutes, the DVD video camera/
recorder will automatically return to the
recording pause status.
2 Press the C button.
Playback will stop, and recording pause
status will be restored.
Note:
• If the LCD monitor is open during playback of movie,
playback sound will be heard from the speaker. Adjust
the sound volume using the volume control buttons
(S, R).
• To temporarily stop playback, press the A button.
Press the A button again to restart playback.
• Even if you stop playback midway and immediately
start recording again, the new image will be recorded
after the last scene on disc or card (the previous
images will not be overwritten).
• Image data edited on PC, etc., or the recorded image
may not appear on this DVD video camera/recorder;
also, the recorded sound may not play back,
depending on the type of image data.
• Image data recorded on another DVD video camera/
recorder or DVD recorder may not be played on this
DVD video camera/recorder.
• Depending on the amount of data to be played back,
it may take some time for the playback image to
appear.
• Do not operate the power switch or remove the card
while the ACCESS/PC or CARD ACCESS indicator is
lit or blinking: Doing so may damage the card or the
data on card.
• If a disc recorded is used at high temperatures,
normal playback may be impossible: Turn the DVD
video camera/recorder off once, wait until the ambient
temperature becomes lower, and then operate it
again.
1</3
DELETING LAST RECORDED SCENE
1 Press the MENU button during playback.
2 Choose “Edit”, “Delete Scene”, and then
press A.
The screen for verifying deletion will appear.
3 Choose “YES”, and then press A.
The last recorded scene will be deleted, and
the recording pause status will be restored.
Note:
• If you press the MENU button during playback using
the Disc Navigation menu, “Delete Scene” will not
appear.
Before You Begin
• Insert a disc or card recorded on this DVD video camera/recorder (p. 41,
42).
• Turn the DVD video camera/recorder on (p. 31).
Use f / e / d / c to select,
and then press A to designate.

Email This Tech For Less Support Page to a Friend

To add a product select a category below or simply search by model number.

Looking for the manual for a product you purchased at Tech For Less or researching before buying? You came to the right place.

Search for your Tech For Less product by entering the model number in the search bar above, or use the categories below to find your item.

Tired of losing your support information? Just add the manual for your Tech For Less product to your collection, and access it anytime.

Find Your Products By Category